The pictorial potentials of the frame in medieval art 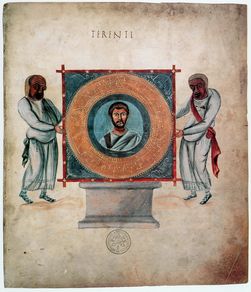 Despite the fact that the use of frames is central to the creation of images in the middle ages the functions of frames and their pictorial potential have yet not been sufficiently analysed. Frames in medieval art feature a remarkable variety in their forms, applied contexts and functions. They appear in books, mural paintings and three dimensional objects and the attention payed to the frame often does not drop behind the attention payed to the framed object. A frame may only consist of simple lines, but frequently they feature architectural elements or even become inhabited by elements of the images themselves, making it difficult to distinguish between the spheres of the frame and that of the image. Also, in many cases we do not find an image enclosed by a frame but initials, texts or even peculiarly empty fields. Different objects, media and contexts go along with different situations of perception, different modes of seeing as well as different relations between image and beholder. The project aims to show that frames played a key role within the visual articulation and organisation of these often very complex and semantically loaded relations that were key to the functioning of images in the middle ages. As shown for the bronze portal of Hildesheim, the frames indicate how the beholder has to apply his attention: The plain but elaborate structure of the frame formally visualizes the idea of complexity without distracting attention from the images, alerting the viewer to watch focused and carefully. The frames here modulate the way the beholder beholds the work.

The notable flexibility of framing structures in medieval art leads to the question whether certain theories developed outside the history of arts may offer a more convenient starting point for this project than the theories on the picture frame developed in 20th-century aesthetics. For the sociologist Erving Goffman frames are concepts that organize our perception. The frame is considered as a tool of organisation and modulation and this may also apply to the material picture frames in medieval art.